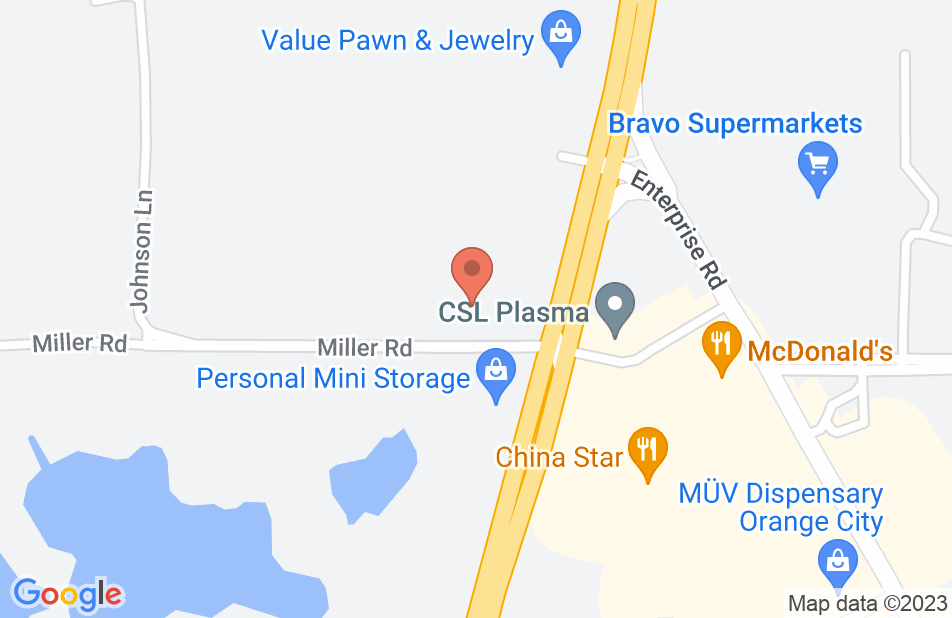 Law Offices of Stacy A. Eckert

My husband and I never thought the day would come that we would have to file bankruptcy but unfortunately we fell to the point financially where we didn't have any other option. We were scared, nervous and didn't know what to do at first. I called several attorneys in the area unfortunately they were out of our pay scale but the moment I sat and talked to Stacy in person I knew within the first 5 minutes he was gonna be my attorney. He is a very intelligent, smart, affordable and he walks you step by step to make sure your understand every detail of everything. We couldn't have chosen a better attorney than Stacy Eckert and we are blessed to have him in our corner.
This review is from a person who hired this attorney.
Hired attorney

Attorney Eckert assisted me with my case and he and his staff where so helpful every step of the way. Any questions I had were answered right away or within 24 hours. They were always available when needed. I would recommend his practice to anyone needing an attorney with a Bankruptcy case. Thank you Attorney Stacy Eckert, Pat, and Bonnie.
This review is from a person who hired this attorney.
Hired attorney

Helped in a land matter..

Thank you Stacy Eckert!! You did a GREAT job for me.Very helpful. He explained everything to me as well.
This review is from a person who hired this attorney.
Hired attorney

I never thought I'd have to file bankruptcy, but my husband's job loss and having 2 minor children, a mortgage, etc., forced us to do so. Dealing with Stacy Eckert and his staff was smooth as silk, he was friendly, kind, open and answered all of our questions. I was SO worried (so was my husband) and we had no idea what to expect - he made everything SO easy for us - it was awesome. Every penny counted to us & he was worth every dime we spent on his services. I couldn't say a bad thing about him. We used him 7 years ago and were discharged 5 years ago and I needed some info as we're trying to refi due to a LARGE increase in our variable rate mtg - they're putting up our mo $ from $1200 to $2k which we simply cannot pay - I asked him for documents - 5 years later - and he had them to me in minutes - he's the BEST - and we highly recommend him!
This review is from a person who hired this attorney.
Hired attorney

Mr Eckert and his staff

Most lawyers get.a bad wrap but Mr Eckert is not a lawyer that fits the norm it was a pleasure to deal with him and his staff I would highly recommend him and have, his staff is knowledgeable and helpful and a pleasure to work with thank you Eckert and staff. L Southard

Hired him for simple chapter 7 bankruptcy. My case was simple; discharge of debt, keeping my primary residence with intetion to continue to pay mortgage. Along the way I was over charged by office staff by $100 outside the scope of the client-lawyer agreement. The agreement was $1300; I was billed an additional $100 according to Bonnie, "Mr. Eckert says its been too long." There was no official written notice & I paid it. I was near the end of the case & just wanted it finalized. As I provided documents I was repeatedly told my documents would not open. I soon realized the office staff is not equipped with modern technology software such as Mircosoft office. Staff was unable to open word docx, excel spread sheets... Therefor I had to go back and change all my records provided to pdf format. This was time consuming and frustrating. If the staff notified me prior, I would have sent everything in pdf originally. Finally, my mortgage was blocked for online payments and sold to a "B" lender. This was a huge surprise. I was very upset & highly inconvenienced by this as I am now no longer able to pay online. The new lender only takes checks or phone payments for a fee; $13. I asked the original lender why this happened. They informed me that I failed to reaffirm my mortgage when I filed bankruptcy. They said they sent the reaffirmation document to my attorney. I was completely unaware this was an option. I called the law office & asked for clafification. Bonnie stated to me telling me there was no such document received. I asked for a copy of the document from the lender which they provided with Mr Eckerts address in the heading. Mr. Eckert was confronted and admitted they did not provide the document. He said he made the decision not to provide it because it was in my best interest to not reaffirm. This is outrageous that an attorney would deny his client services. I called the FL Bar & was told I could file a complaint & Mr Eckert would have to reopen the case at his cost & file the reaffirmation document. Unfortunately, this would not return me to my prior lender. Mr Eckert did refund me the $100 over charge. I suspect this was due to fear of me filing a complaint with the bar. I had other issues with office staff during the case. Mary Pat was incredibly uncouth on several occasions questioning me about the cost of my hair cut, the small $7-$8 expenditures from my checking account, and the unfriendly condescending tone. I am pretty sure the office secretary should not take charge questioning clients about the cost of their personal expenses. That is reserved for the professional. The failure of reaffirmation of my mortgage has caused me an incredible inconvenience. I felt that this attorney was not transparent with me. I feel as he was not on my side and skirted the case to provide as lean service as he possibly could. I hired him August 2013 and finalized the case in August 2014.