Steve Hill is a husband and father of two young children. He has more than 20 years of legal experience in Oregon and is admitted to practice in both the state and federal courts. Steve grew up in Minneapolis, Minnesota, graduated from Oberlin College in Ohio in 1986 and spent years working as a daily newspaper reporter on the Iron Range of northern Minnesota. Before graduating from law school at Case Western Reserve University in Cleveland, Ohio, in 1993, he spent a number of years teaching in Milan, Italy. During law school, Steve worked for two years at a law firm that focused exclusively on helping injured people. When he moved to Oregon, he initially worked on the defense side of civil injury cases, which provided him with a valuable perspective that continues to help him resolve cases for injured people today.

In 2013, Steve was named Employer of the Year by the Pendleton Chamber of Commerce. He has volunteered his time as a board member for the Oregon Trial Lawyers Association and as the president of the Pendleton Rotary Club and is a longtime member of the American Association for Justice. To learn more about attorney Hill, please view his attorney profile.

Steve is recognized as one of the top personal injury lawyers in the state by Oregon Super Lawyers, which evaluates attorneys based on peer recognition and professional achievement.

Darcey Ridgway is the firm’s legal assistant.  She has worked with Steve since 2003.  Darcey graduated from Washington State University with a B.A. in Political Science and from Moorpark College with an A.A. in Wildlife Education.  Darcey returned to her hometown of Pendleton after many years away at college and working as an elephant trainer at Six Flags Marine World.

Darcey handles scheduling matters, insurance and Medicare issues and keeps in touch with clients about their medical treatment.  She handles a variety of pre-litigation and litigation matters and the administrative tasks associated with settlements.  Darcey’s favorite parts of her job are meeting new clients, setting up new files and giving clients good news when their claims or cases are resolved.

Darcey is active in Altrusa and is also on the board of the Education Foundation of Pendleton.  Darcey enjoys swimming, cooking and is a big football fan.

Lorena Inocencio is a legal secretary and receptionist. She is often the first person people speak with when they call and the first person they see when they arrive in the office. She joined the firm in 2006. Lorena speaks Spanish fluently and provides interpretation in meetings with Spanish speaking clients.

Lorena grew up in Hermiston where she lives with her husband and two children. She enjoys spending time with her extended family, working out and running.

Andrea Mercado is a document manager and has been at the firm since 2006. She speaks Spanish fluently and works closely with Spanish speaking clients. Andrea grew up in Pendleton. She is a dedicated member of her congregation. She loves spending time with family and friends. She also enjoys cooking, traveling, running and trying new things. 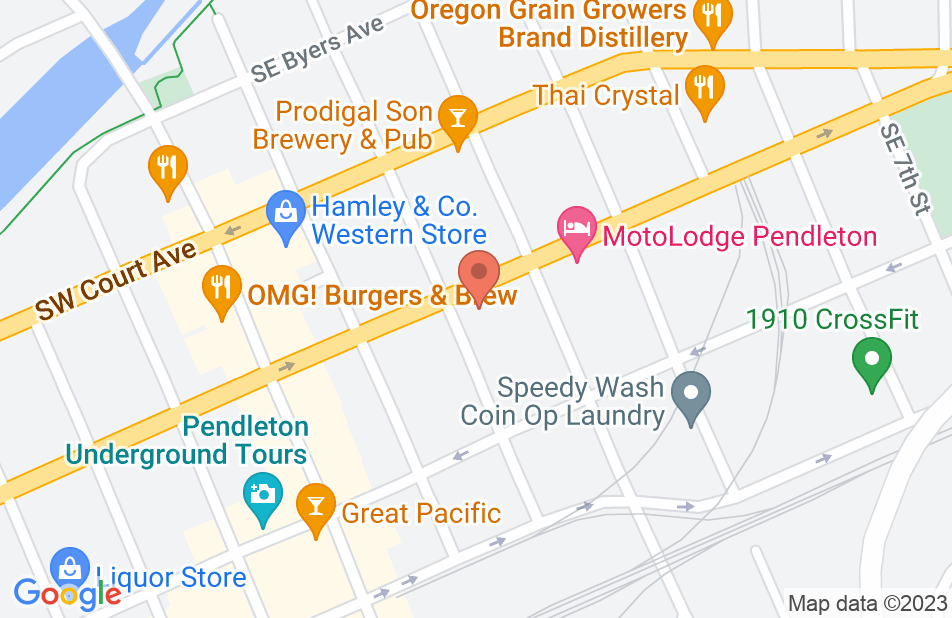 Steve Hill was my attorney through a very challenging time. Steve and his team are amazing! They are very knowledgable and caring. They truly do put every effort they can into helping others and explaining the legal processes clearly. I would not reccomend anyone else who needs an attorney for Steve's practices in this area. He and his team are fantastic!
This review is from a person who hired this attorney.
Hired attorney

From the moment I meet Mr. Hill and his staff I felt the compassion, professionalism, and sincerity that continued during the time they worked on my difficult automobile accident case. There are not enough words to express my gratitude for the exceptional job that Steve Hill, Darcey Ridgeway, and his staff did. I would HIGHLY recommend this attorney and his staff to anyone who is in need of a personal injury attorney.
This review is from a person who hired this attorney.
Hired attorney

I recently used Steve Hill for A rear end accident I was in. Him and his staff went above and beyond to help me with my case and all needs I had. This was a workmen comp accident and even know he isn't a W.C attorney he still went way above and helped me with everything.. I would highly recommend him.
This review is from a person who hired this attorney.
Hired attorney

An amazing attorney with an equally amazing staff

After being injured in an auto accident in 2013, I went to see Steve for a consultation. He supplied me with the necessary information and statutes to be able to take on the insurance company by myself with confidence. As I was leaving our meeting Steve assured me that, should things become complicated, he would be ready to represent me. Months later, when things had become more complicated and I didn't feel I was qualified to proceed any further, I again went to Steve. He took over my case, contacting the insurances companies involved and their attorney. Steve and his staff spent over 2 1/2 years dealing with all of the legal issues and medical bills. Not only did they represent me, they made me feel important. Never once did I question whether I'd gone to the right firm for help. They did it all and we didn't have to go to court to get a fair settlement. If you have legal issues stemming from a personal injury or any of the other situations Steve handles, do yourself a favor and call his office. You won't regret it!
This review is from a person who hired this attorney.
Hired attorney

I had a feeling there was nothing that could be done due to Oregon laws. Even after explaining to the person that send me the email from here about my circumstances, and what had be previously attempted by another lawyer, she still asked me to come into the office, This did get my hopes up, which I fell was totally unnecessary and actually unprofessional. . The rejection letter was actually quite cold too.
This review is from a potential client who consulted with this attorney.
Consulted attorney

I endorse this lawyer. Steve is a hell of a guy and very conscientious in his representations. I wouldn't hesitate to refer any type of case to him. If I were hurt I would hire Steve.

Steve is a passionate and hard-working personal injury lawyer who truly cares about his clients.

Steve is an experienced and capable personal injury lawyer. His down-to-earth manner and clear communication style make him an effective advocate for his clients. He has a great staff. He is definitely one of the few "go to" attorneys east of the Cascades.