He has been recognized nationally by prestigious law organizations such as the National Trial Lawyers Association (Top 40 Under 40, 2012 & 2013), the highest designation from online law directory AVVO Corporation (“Superb” rating for 2012 & 2013) Super Lawyers, a publication of Thomson Reuters Corporation (Texas Rising Star for 2009, 2011 and 2012) and is a lifetime member of the Million Dollar Advocates Forum.

As a trial attorney Jack takes pride in giving a voice to people and families who need help battling powerful adversaries.

Jack has been lead counsel on hundreds of wrongful death and catastrophic injury cases. These have typically been against dangerous truck drivers, drunk drivers, corporations who manufacture dangerous products, and employers that have created unsafe work environments.

Jack graduated from Baylor University School of Law and received his undergraduate degree from Southwestern University, in Georgetown, Texas. When not practicing law, he enjoys spending time with his beautiful wife Melissa and their two sons. 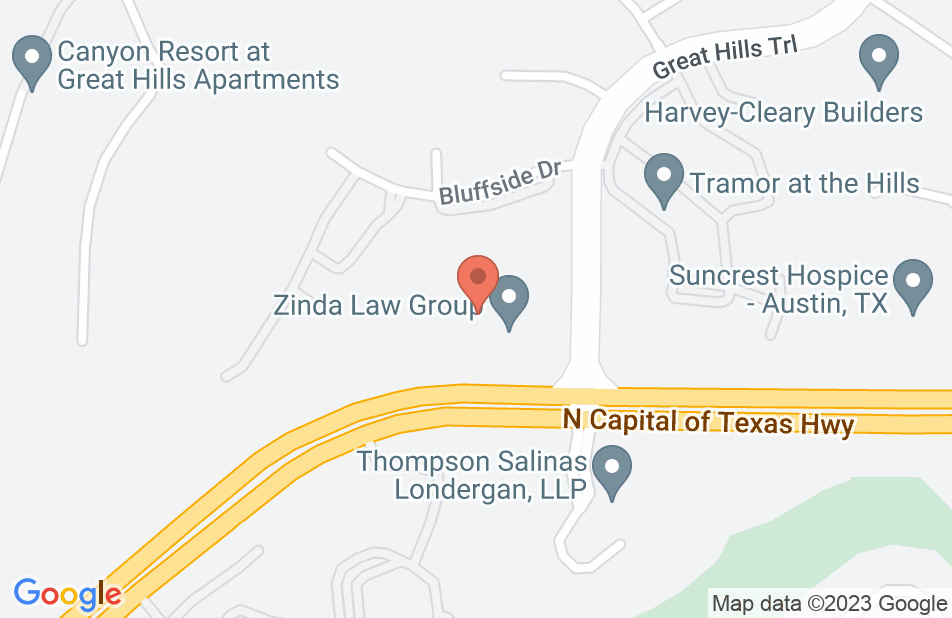 Walked us through the different stages, helping us to know what to expect at each proceeding.

This was the first time ever needing an attorney, we felt pretty ignorant when we first met Jack Zinda. Jack Zinda presented professional experience and self-confidence, he was respectful and genuinely concerned for us as people (not a s "case"). Even though our situation was difficult, we felt confidence in Mr. Zinda handling our case. He made us feel comfortable, allowing us time to share our concerns. He returned our calls and answered our questions. He treated us as if we were his only case. Jack Zinda is knowledgeable; he brought in additional expertise specific to every facet of our case in order to provide the best defense. He also explained each purpose and steps of accomplishment. He also described and walked us through the different stages, helping us to know what to expect at each proceeding. We believe he helped to prepare us in advance for every aspect, including the emotions that may come during a hearing or trial of this type. Mr. Zinda's Paralegal, Jenni Wise, was thoroughly professional. She demonstrated respect, and offered constant communication. Jenni kept us informed, she answered our questions and took the time to explain or describe the characteristics of each proceeding. We are very thankful Jack Zinda received our case and will forever be grateful to him and his staff.

I highly recommend Jack Zinda to anyone I know who needs an attorney. Jack is a very professional and knowledgeable lawyer. He really understood my husband and I as clients, knew how we felt and what we were going through. He has always been available to answer the many questions I had, and I always had plenty. He is an all-around great person to know. Jack Zinda is truly a Super Star!

Jack Zinda helped me with a time sensitive, emotional legal matter with expediency and compassion. I am thankful to Mr. Zinda for his help during this difficult time.
This review is from a potential client who consulted with this attorney.
Consulted attorney

Jack Zinda really helped me out with some complicated legal issues I was facing. He took a lot of time to talk to me about what was going on and did a bunch of extra work that I didn’t expect (at no additional cost). I could tell that he really cared about me and wasn’t just looking for a financial recovery. There are a lot of lawyers out there, but I would call Jack Zinda and Zinda & Davis if you need help with a personal injury first.
This review is from a person who hired this attorney.
Hired attorney

From the moment I met Jack I was impressed with his professionalism. He walked me through every step of the litigation process and was straight forward and honest about my prospects of winning. My injuries were pretty serious and I was concerned I wouldn't get fully compensated. Jack was able to get me what I felt was more than fair and help me get my life back on track.
This review is from a person who hired this attorney.
Hired attorney

Made a very difficult time in my life a little easier.

The entire staff was very accommodating and kind making this very difficult time in my life a little easier. I appreciate all of the hard work and concern for my father’s case. Thank you all so much!

There ARE some really honest, helpful lawyers!

Over the past six years Jack has helped my husband and I with several legal matters. Dealing with insurance companies can be a nightmare. Jack and his firm cut through all of the red tape and we were able to receive an equitable settlement for an automobile accident that paid our medical bills and gave us some breathing room financially. He also helped us navigate the murky waters of a civil lawsuit dealing with some family property. We have trust his ethics and have never had a phone call go unanswered. Jack was empathetic and professional. I have recommended him to friends and coworkers and wouldn't hesitate to call him again for any legal issues that occur.

Caring and Passionate There for the Tears and Heartache

Over the past 3 years, Jack and the staff of Zinda and Davis, became part of my family and my life. The care and passion that they showed (expressed) to me and my husband was like no other. Jack was an attorney that was there for the tears and heartache. Jack always had a positive word or expression and Jenni his paralegal is a God Send.

Someone in your corner

There comes a time when you need someone in your corner that you can trust. Our time came when we knew we needed the advice and counsel of an attorney. The day we walked into the the law office of Zinda and Davis we knew we were covered. I would recommend Jack Zinda and Joseph Caputo to anyone. They are as personable as they are great at what they do. They were caring and trustworthy and went above and beyond to help us solve our legal issue as quickly and efficiently as possible.

Took my case when otehrs turned me down.

Zinda & Davis took my case while other lawyers (at least two) turned it down.
See all reviews

Jack is an extremely talented attorney who puts all of his passion and resources into providing a positive outcome for his clients. I would hire Jack if I needed help and regularly trust him to assist in the representation of my clients as well. Jack is a tremendous asset to his clients and this profession.

I strongly and unequivocally endorse Jack! He is an intelligent trial lawyer who repersents his clients with zeal and compassion. But most importantly, he is trusthworthy and honest! He will go beyond the call of duty for each of his clients.

Rachel Craig, Litigation Attorney on May 12, 2015
Relationship: Worked for lawyer

Jack is the person you hire when you are looking for an attorney to engineer your success. He is meticulous, driven, and pays very careful attention to every detail of your case. He is deeply cognizant of the effect each decision will have on your case and will ensure that you are always moving in the right direction to achieve your goals. I highly recommend Jack Zinda to resolve your personal injury case.

When asked if I would recommend Jack to my friends and family my answer is unequivocally yes. True compassion and fervor for personal injury shines in every aspect of his work and his absolute dedication to the law.

I strongly recommend Jack for personal injury matters. He is an outstanding litigation attorney and serves his clients well.

Jack is one of the hardest working attorneys I know. His fidelity to the law, and his dedication to the client, make him in my opinion one of the best trial lawyers. I am comfortable sending any of my friends and family to Jack, because I know he will treat them like his own family. I'm proud to have grown this firm with him and to call him my business partner.

Jack's optimism and fearless approach to litigation makes him an ally and representative any victim would be lucky to have.

Jack is a problem-solver and strategist who takes into account every detail in order to put on the best case for his clients. His attention to detail and ability to spot issues continues to serve injured clients better than anyone in the state. I highly recommend Jack Zinda to handle any personal injury matter.

Jack is a great lawyer. He is aggressive with his cases and compassionate with the clients. Your case will not sit around untouched at his firm.