Charles Moore has practiced law all over the United States.  He began his career in Southern California in 2005.  A few years later, he moved across the country to practice law in the Princeton, New Jersey area.  He has always practiced primarily in the estate planning / probate and elder law field, along with having significant experience in representing fiduciaries and beneficiaries in estate and trust litigation matters.  This has been by design since he is passionate about these practice areas.

In 2009, Charles took a great opportunity to move back home to St. Louis, Missouri and open his own practice, Legacy Law Center.

The firm has two locations.  The main office is in St. Charles, Missouri.  The second office is about 15 minutes west in the Winghaven neighborhood of O'Fallon, Missouri.

He is married and lives in St. Charles County.  He and his wife are avid travelers and Charles has been to a dozen countries, with hopes of eventually visiting at least 75.  He is an avid photographer and his office is covered with his work. 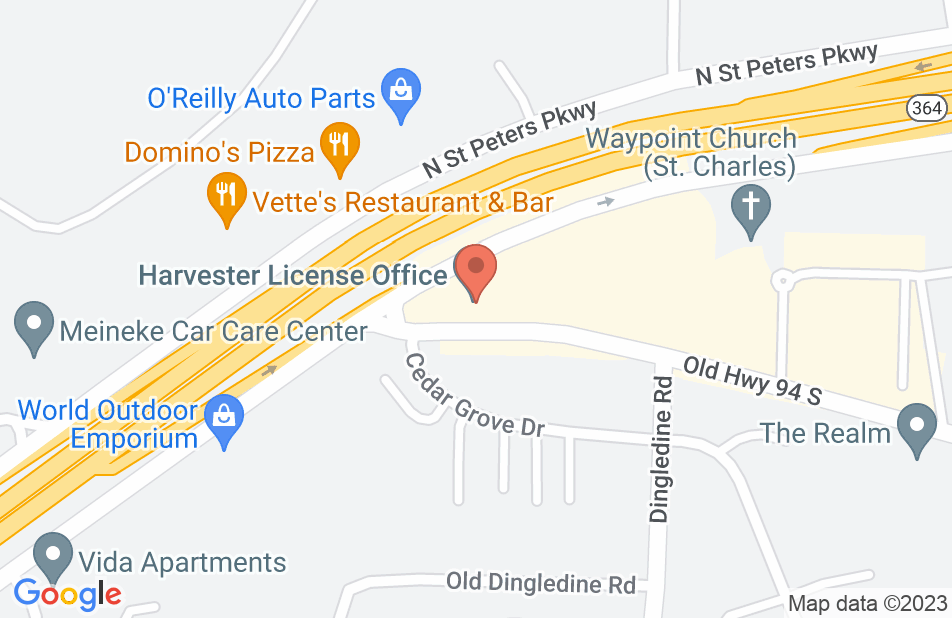 Mr. Charles Moore was exactly what a probate lawyer should be, and I’m grateful for him and his services. He spoke to me as a human being, not just a voice over the phone. I was already nervous to speak about things, things I really didn’t know about, and he explained everything to me with easy and concern. I trust Charles Moore, especially during a difficult time. I feel like I’m in good hands, so grateful. Thank you for being professional, and honest.
This review is from a person who hired this attorney.
Hired attorney

Mr. Moore made my estate planning a very simple process. I had put it off for a very long time thinking it would be complicated and quite frankly "not a fun thing to do". I appreciate his knowledge and individual assessment of my personal wants and needs for my families future. I encourage you to give him a call.
This review is from a person who hired this attorney.
Hired attorney

I consulted with Charles Moore regarding a Durable Power of Attorney for Banking Matters for my 96-year-old mother. Since she resides is a Nursing Home in the Kansas City area, Charles referred me to a Kansas City attorney for assistance. He also explained the criteria for Medicaid Nursing Home payments. Charles was generous with his time to answer all my questions. I would definitely hire him for a local issue, but appreciate his referral.
This review is from a potential client who consulted with this attorney.
Consulted attorney

Will and Living Trust - Positive experience with Legacy

I contacted Legacy Law to setup my estate plan. It would be fair to say "I didn't know what I didn't know", so I didn't go in with a lot of prepared questions. Chuck Moore guided me through all sections of the estate plan. What stands out was his sense of when something could become vague during execution of the estate. He would drill down with further questions to make sure there were no ambiguities. Overall, my experience with Chuck Moore and the team at Legacy Law was positive. I would definitely go back for other legal matters.
This review is from a person who hired this attorney.
Hired attorney

I met with Charles to review how to best plan my Estate. Charles took time to understand both my financial standing as well as my family needs. After a short but efficient discussion Charles offered up a couple alternatives and provided the benefits of each. I ended up creating a Living Trust which allowed for special care of one of my children with special needs. I also left feeling comforted that I had provided detailed explanation of my desired living will, power of attorney and distribution of wealth. I put it off far too long. I can now rest assured I did the best I could to remove burden from loved ones while attaining my wishes. Thank You Charles and Legacy
This review is from a person who hired this attorney.
Hired attorney

My husband and I hired Mr. Moore to create our living trust. He made the process super easy, quick, and painless. Any question I had he could answer. He knows his stuff! He was very prompt in getting us our documents as well. It was a great experience and I would recommend all those that I know needing to work in a living will, a trust, estate planning, ect.
This review is from a person who hired this attorney.
Hired attorney

Mr. Moore helped prepare a trust and will for me. He reviewed my desires and offered excellent suggestions and included additional information and legal documents. I would recommend his services for your estate planning needs.
This review is from a person who hired this attorney.
Hired attorney

Trust Accounts and Wills for me and my wife

I can't say enough good concerning Charles Moore. He assisted in establishing trust funds and wills for me and my wife. I was hesitant in going to an attorney because of my concern of our complexity, but Mr. Moore made it painless. He listened to both of us and then prepared flawless documents. I have dealt with many attorneys during my business career Mr. Moore ranks with the best. If I every need an update or legal representation, I would not hesitate using his firm again.
This review is from a person who hired this attorney.
Hired attorney

We were very pleased with Charles Moore! He was very easy to talk with and made everything very clear to us. We needed estate planning documents, and he quickly and reasonably put all of the information together for us and delivered a wonderful binder to keep us organized and on track! I have highly recommended him to many of our friends and relatives. Great job, Chuck, and thank you again!!
This review is from a person who hired this attorney.
Hired attorney

Charles walked me through the entire process from beginning to end. He explained everything so that I could understand and he made everything as easy as he could. After everything was said and done, it encompassed just two visits for initial consult to signing everything. I appreciated the simplicity as well as his thought and care towards my final wishes. I could tell that my wishes were his priority. Cost was very good and better than the others I checked. I highly recommend Charles and have already referred a few family members.
This review is from a person who hired this attorney.
Hired attorney
See all reviews

Charles is a talented attorney who brings his sincere desire to help to each case. He knows that estate planning is one of the most critical elements of caring for your loved ones. Charles is a credit to the legal profession and I am proud to endorse him.

Charles is a great attorney who gives good advice on AVVO. He displays a combination of intelligence and compassion that is very rare in attorneys. I endorse this lawyer.

I endorse Charles without reservation. He has demonstrated an exceptional grasp of the law and has the skills of a superb litigator.

I endorse Charles Moore. He is my go-to estate planning attorney in Missouri.

I endorse this lawyer. He is very knowledgeable and well-respected in the legal community.

I endorse this lawyer for their knowledge and dedication.

I have known Charles "Chuck" Moore for many years and during that time he has proven to be knowledgeable, professional, and trustworthy. Chuck is an excellent attorney that I endorse with confidence.

Chuck is a very efficient, effective, client centered Attorney. Whenever my clients have an estate planning or elder law need in the St. Louis area, he is the only Attorney we refer. He is knowledgeable in his field and truly cares about his clients. I am pleased I have such a great resource to refer for my own clients.

Mr. Moore and I practice in some of the same areas of law. As such, I have had an opportunity to review several of his responses on Avvo. Mr. Moore has a solid grasp of probate law and a willingness to help others. These are two essential traits when seeking a probate and estate planning attorney. James Frederick

I endorse this lawyer. He is compassionate to the asker in his responses and experienced.

A very well respected lawyer who will do an excellent job whether helping you plan your estate or helping you with a DUI. I endorse this lawyer.

I endorse this lawyer. His answers show compassion for the asker and his knowledge of the practice area.

Jill Rogers, Divorce and separation Attorney on Mar 4, 2015
Relationship: Other

This lawyer is highly respected in the community. I endorse this lawyer

I endorse this lawyer. Charles works very hard for his clients and protects their interest in every fashion. One trait that I admire about Charles is that most of his business comes from fellow attorneys and current and past clients. Charles is very well respected by his clients, attorneys and judges in the State of Missouri

Mr. Moore has proven himself to be well-respected and very thoughtful. I highly recommend him to any and all potential clients.

I worked with Chuck on a trust and estates matter. He was courteous, well prepared, and advocated well for his clients. I endorse him without reservation.

I endorse Charles Moore, He is a great advocate for his clients and has a top notch estate planning practice. .