Helping thousands of consumers since 1996 to resolve their lemon law and other consumer claims.

Scott M. Cohen has been employed as an attorney at Krohn & Moss, Ltd. since 1996. He earned his Bachelor of Arts degree in Political Science from the University of Illinois in Champaign-Urbana in 1993 and his law degree from Ohio Northern University, Pettit College of Law in 1996. While at Ohio Northern University, he was an Associate Editor of the Ohio Northern University Law Review.
Mr. Cohen is admitted to practice law in Illinois and Indiana. He is also admitted to practice before the United States Supreme Court, the United States Seventh, Eighth, Ninth, and Tenth Circuit Courts of Appeal, and the United States District Courts for the Northern, Central, and Southern Districts of Illinois, as well as the Northern District of Indiana. Additionally, he is a member of the Federal Trial Bar.
Mr. Cohen has successfully handled thousands of consumer actions by means of settlement, court ordered arbitration, mediation, trial, or appeal. As nationwide appellate counsel for Krohn & Moss, Ltd. he has successfully argued six (6) landmark consumer appeals before the Supreme Courts of the States of Illinois, Indiana, Florida, and Wisconsin. He has also successfully argued or briefed numerous other appeals before the intermediate appellate courts for the States of Illinois, Indiana, California, Wisconsin, Indiana, Missouri, Georgia, and Florida. 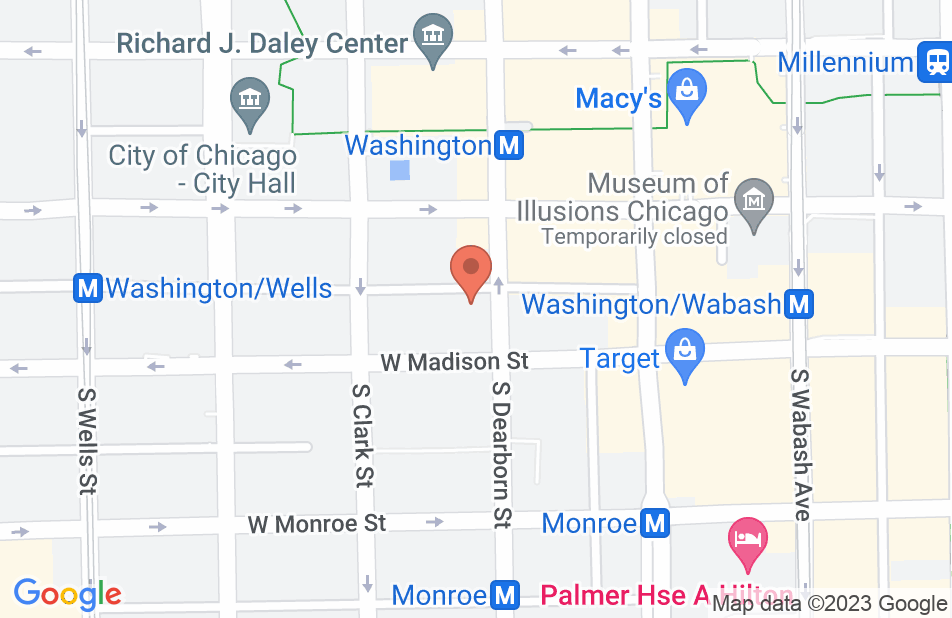 Hired Scott Cohen to file suit against car company that would not honor the warranty. He negotiated a great settlement and was efficient, pleasant, and always quick to communicate. Excellent attorney and firm.
This review is from a person who hired this attorney.
Hired attorney

Wow! Scott Cohen was amazing and spot on with my case. His knowledge of the lemon laws and other laws similar to the lemon law is in depth. He guided me through a very painful experience with a vehicle and was straight forward in the process. I took his advise 100% of the time. Scott's communication and responsiveness was impeccable. If I ever had a question either by phone or email his response was very quick and to the point. I can't thank Scott enough on how he handled our case from start to finish. He is very professional and will guide you in the right direction. If you are looking for an attorney who is well versed in Lemon Laws, Scott Cohen is the perfect candidate to handle your case.
This review is from a person who hired this attorney.
Hired attorney

Having an issue with a GM vehicle & unable to resolve it. Contacted Krohn & Moss and was immediately paired with John whom then involved Scott. Both were highly professional, knowledgeable & kept me fully informed as the suit progressed. Very impressed with their negotiating skills. Totally satisfied with our settlement & certainly recommend them.
This review is from a person who hired this attorney.
Hired attorney

My lawyer, Scott Cohen did a fabulous job. He really know what he is talking about and gets the job done well! I couldn’t be more satisfied with the outcome of my case. Highly recommended!!
This review is from a person who hired this attorney.
Hired attorney

Scott Cohen is my hero... We had to work hard and long to get this one done. He would call and respond at hours that normal legal services would not have been responding back at. He was not going to take no for an answer. I would never second guess what he was guiding us to do. Sir, you are awesome. Big THANK YOU. :)
This review is from a person who hired this attorney.
Hired attorney

Scott Cohen is a patient man. Scott Cohen is compassionate about is work and looks out for the best intrest of his clients. I am glad that Scott Cohen represented me in my Lemon Law case because he eased my mind and took all my worries and concerns away from the very first time we talked.
This review is from a person who hired this attorney.
Hired attorney

Scott is an excellent communicator, who knows how to get things done and explain every step of the process and what to expect along the way. Very impressed with his straightforward approach and his expertise when it comes to Lemon Law claims. Very happy with the settlement we're receiving as a result of working with him.
This review is from a person who hired this attorney.
Hired attorney

Attorney Cohen is a fantastic attorney. He is very prompt at returning calls and emails and took time to talk to me to explain everything so I understood all my options. He took a bad situation for me and turned it around and helped me through it. I would recommend him to anyone that needs a lawyer. I received a great outcome due to his hard work and persistence.
This review is from a person who hired this attorney.
Hired attorney

I would highly recommend Scott Cohen if you need someone to help fight for your rights when you've had issues related to a new vehicle and the manufacturer.The response on phone calls were truly amazing returned the same day as well as emails a lot of the times the email response was within minutes. I was truly amazed with the service that I received form Scott Cohen I HIGHLY recommend him !!
This review is from a person who hired this attorney.
Hired attorney

Scott Cohen helped us navigate through the very confusing and frustrating process of having a new vehicle that continuously had issues and was at the dealership being fixed constantly. All phone calls and emails were returned the same day and Scott explained and gave us great advice on the very confusing lemon law process. We would highly recommend Scott because he fought for us against the vehicle manufacturer and helped us resolve the case in a very timely manner. Thanks Scott for your help and concern pertaining to our case against Chrysler/Jeep. We knew after our first conversation that Scott had a lot of knowledge and experience about the Lemon Law and we had found the right lawyer for our situation.
This review is from a person who hired this attorney.
Hired attorney
See all reviews

Scott Cohen is one of the most knowledgable federal warranty and lemon law lawyers in the nation. His work has helped many consumers nationwide with products that don't live up to the promises made by the manufacturers of those products. I appreciate his work as it has helped craft this ever-changing legal landscape for the better.

Scott is one of the foremost consumer protection attorneys in the country. His credentials and appellate work are impressive and speak for themselves. I endorse this lawyer.

Scott is an excellent lawyer with great attention to detail. Scott is hands down the expert on the Magnuson Moss Warranty Act, and has been integral in developing the case law to protect consumers.

Scott Cohen is one of the most knowledgable federal warranty and lemon law lawyers in the nation. His work has helped many consumers nationwide with products that don't live up to the promises made by the manufacturers of those products. I appreciate his work as it has helped craft this ever-changing legal landscape for the better.

Scott is an experienced civil litigation attorney who has significant knowledge of Lemon Law and other consumer matters.

Scott Cohen is one of the nation's premier consumer protection and Lemon Law attorneys. I worked with Scott for 3 years. During that time, I saw first-hand how he works tirelessly to achieve the best results for his clients. Scott is an attorney of integrity, knowledge and experience. He has successfully resolved countless matters through settlement, arbitration and mediation, and has significant trial and appellate experience. Scott is meticulous in his workup of a case, leaving no stone unturned . I highly recommend Scott Cohen.

Excellent attorney and highly expereinced litigator. One of the greatest mentors during my career.

Scott is one of the foremost experienced and accomplished Lemon Law attorneys in the nation. He has not only devoted his entire career towards helping consumers, he has had tremendous success at the trial court level and on appeal. If I ever needed assistance with a Lemon Law matter, I would contact Scott. I highly endorse this lawyer!

Scott is one of the most accomplished and skilled consumer rights attorneys in the country. I have recommended him on a number of occasions to people who were seeking a highly-skilled attorney to represent them against the big automakers in breach of warranty cases and against dealerships where potential fraud was at issue. Scott is a fighter for the people and has made it his life's calling to represent and fight for consumers. If you need an attorney, I highly recommend you call and retain him to fight for you.

Merick Limsky, Corporate and incorporation Attorney on Feb 28, 2014
Relationship: Other

Scott wrote the book on the lemon law. Whatever the lemon law question, Scott has the answer. He is hardworking, skilled, knowledgeable, and gets good results for his clients. Scott's dedication to his profession and to his clients is unmatched. I endorse Scott.

I endorse Scott Cohen as a terrific litigation attorney! As supervising attorney for Krohn & Moss, LTD, Scott represents consumers in Lemon Law actions and Magnusson-Moss Warranty Act claims against auto manufacturers who sell defective automobiles. I have worked closely with Scott since 2007 and have always found him to be a tireless and aggressive advocate for his clients. Scott is intelligent, hard-working, knowledgeable, trustworthy, diligent, friendly and accessible... he possesses all the traits a client could want in an attorney. He has also been a mentor to me throughout our years working together, offering me sound advice and litigation tips, teaching me how to be a better litigation attorney. He is also a good friend with a terrific sense of humor! It is my pleasure to endorse Scott Cohen as a superior litigator and trial attorney.

I endorse this lawyer. I've worked for and with Scott Cohen for more than 12 years, and he is by far one of the best and most knowledgeable consumer law attorneys out there. Not only that, but he's a true team player who shares the glory of the victories he's helped facilitate through his direct and indirect involvement in cases I've worked on with him. My own ability -- and credibility -- as a lawyer has been enhanced more than I can say by my work for and with Scott Cohen. Scott is one of the nation's premier consumer attorneys.

Mr. Cohen has successfully handled thousands of consumer actions by means of settlement, court ordered arbitration, mediation, trial, or appeal. As nationwide appellate counsel for Krohn & Moss, Ltd. he has successfully argued six (6) landmark consumer appeals before the Supreme Courts of the States of Illinois, Indiana, Florida, and Wisconsin. He has also successfully argued appeals of significant consumer interest before the United States Seventh Circuit Court of Appeals, and the appellate courts for the States of Illinois, California, Missouri, Georgia, and Florida. He has prevailed in well over fifty (50) appeals nationwide, including reversing over thirty (30) trial level decisions, and has successfully managed dozens of other appeals for which he did not personally appear. Mr. Cohen has also tried approximately fifteen (15) consumer actions to verdict.

Scott is dedicated to helping consumers. He was a fantastic mentor during my time at his firm. Thanks to his expertise, I improved exponentially as a trial lawyer. He has an extraordinary ability to analyze all aspects of a case and is very detail oriented. I endorse this lawyer.

Scott is one of the foremost consumer protection attorneys in the country. His credentials and appellate work are impressive and speak for themselves. I endorse this lawyer.