Andrew B. Jones is a trial attorney and one of the few attorneys in St. Joseph County to have served as lead counsel at trial in both civil and criminal matters.  He focuses his practice on personal injury and wrongful death claims, medical malpractice claims, counseling small businesses, criminal defense, domestic relations issues including divorce and child custody, civil collection work, and several other types of civil practice.  He has been named one of the “Top 40 Under 40” Attorneys in the State of Indiana by the National Trial Lawyers.

Andrew is the seventh generation of his family to call Northern Indiana home. He was born in Mishawaka, Indiana and attended Elm Road Elementary School before moving to South Bend, Indiana and graduating from Marquette Elementary School. He graduated from John Adams High School in South Bend, where he served as Editor-in-Chief of both the school yearbook and newspaper. It was through his involvement with the Indiana High School Mock Trial competition that Andrew realized his dream of becoming an attorney and after graduating, he stayed involved with the John Adams Mock Trial program as an attorney coach. This involved volunteering hundreds of hours each winter and spring. The team coached by Andrew, Professor John Scanlan, South Bend Attorney Erin Linder and Drama Coach Lucas Burkett won both the Indiana State Championship and the National Championship in 2011, and Andrew served as Chairman of the Logistics Committee for the 2013 National High School Mock Trial Championship that was held in May, 2013 in Indianapolis.

Andrew holds a Bachelor of Arts degree in Political Science and Philosophy, with honors, from Butler University and a Juris Doctor degree from Boston College Law School. While studying at Butler University, Andrew served as the President of the Philosophy Club, Student Body Vice President, and President of the Mortar Board Senior Honor Society. In addition to serving as President of his fraternity, Lambda Chi Alpha, Andrew was elected Chairman of the Lambda Chi Alpha International Fraternity Council of Presidents. While serving in this position, Andrew represented over 220 chapter presidents and was a member of the international fraternity's 14 member board of directors. He also worked at the Butler University Center for Citizenship and Community where he coordinated service learning opportunities for Butler students, as a resident assistant ("RA"), and as a research assistant for a political science professor. Research Andrew performed has since been published. He was named a "Top 100" Butler Student twice, finishing as one of the "Top 10" Male Students.

While studying law, Andrew worked as a Judicial Law Clerk in St. Joseph County and as a Certified Legal Intern for the St. Joseph County Public Defenders' Office, where he won his first trial while still in law school. He participated in the Boston College Law School 34th Annual Mock Trial Competition and also undertook two semesters of independent study and research with a family law professor. Research Andrew performed has since been published. Andrew had the privilege of studying trial practice under Jack Curtin, a legendary trial attorney and the former President of the American Bar Association. Andrew was the only second year law student to ever earn an "A" in Professor Curtin's 45 years of teaching trial advocacy.

After finishing law school, Andrew moved back to Northern Indiana and began work at Sweeney Julian P.C., where he was Senior Associate Attorney until leaving to join Wruble & Associates in January, 2015. 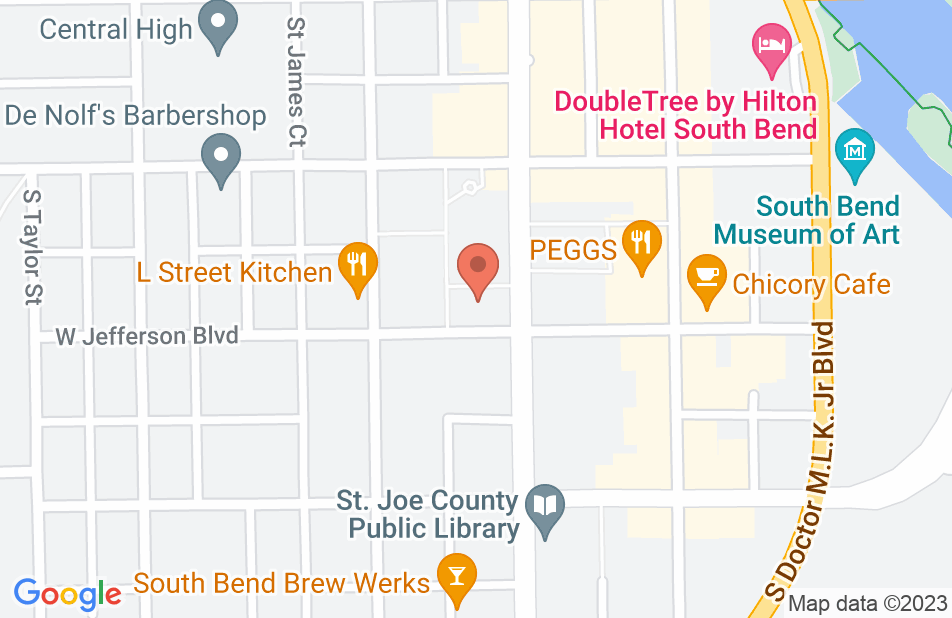 Andrew was a complete pleasure to work with, and took on my case quickly and professionally. He communicated all steps of the process to me in a timely fashion and made sure to check in with me along the way as needed. I never questioned that I was not in good hands and things were worked out easily. I felt comfortable asking any questions I had along the way, and was never made to feel dumb for not knowing certain things. Both Andrew and his paralegal were extremely helpful and professional throughout, and I would absolutely use Jones Law Office again for any legal needs.
This review is from a person who hired this attorney.
Hired attorney

Andrew Jones is an amazing, and very driven lawyer. I have nothing but great things to say about this man! He conducts himself in an ethical manner. Andrew is not only intelligent, but has a great sense of humor making it very pleasant to work with him.
This review is from a potential client who consulted with this attorney.
Consulted attorney

Legal issues can be very intimidating for those of us who didn't attend law school but Andrew explained everything to me in a way which was understandable but not patronizing. His knowledge of the law, quick response time and genuine care for me as a client were comforting and the outcome of the case was better than I could have hoped for. I will use Andrew for any future legal needs!

One of the great ones

Andrew was very knowledgeable and handled my case in a very professional and personal matter. He seemed to care about me and my case, and I was very satisfied with my out come. i would highly recommend him to anyone that needs a great lawyer.

I felt I was taken care of and was able to focus on my recovery while my lawyer was taking care of everything else. I felt like a family member in the group and would highly recommend Mr Jone.

From the first day I walked into the firm I felt welcomed and knew I was in good hands. Good communication throughout and the end result was VERY satisfying!

I went to Sweeney Julian after seeing a commercial on TV. From the very first appointment Andrew and the staff put my worries to rest. They assured me that while it may be a difficult case they would do their best. Andrew's work was stellar. I could not have asked for a better attorney.

Andrew worked on my case, doing much of what I call the "heavy lifting." He is an excellent attorney and has great poise in the courtroom. I was very impressed with his ability to cut through all the legalese and explain each step of the process to me. He is kind and courteous, while at the same time being a pitbull when the insurance company lawyers misbehave. Well Done!

Andrew was great. When the chips were down, he stepped in and fought for me! He is brilliant, honest and hard working. Thank you Andrew and Sweeney Julian

Call Sweeney Julian if you Want to Win!

I was very impressed by this attorney. He handled my case with great skill and care. The staff was very supportive throughout the case. From start to finish, they did a great job. On a personal note, Andrew is very nice and a great communicator.
See all reviews

They do not come any more intelligent or clever than Mr. Andrew Jones. He is always thinking of new angles to protect and advance the interests of his clients. I endorse this lawyer.

One of the smartest guys out there. Every client I've sent Andrew has been treated right. Highly recommend.

On several occasions, I've found myself working opposite Andrew. He's truly an excellent advocate for his clients. He cares about them. And he fights for their rights. If I needed a personal injury attorney, I'd recommend Andrew.

A dedicated attorney who can assist clients with a wide range of legal needs.

I endorse this lawyer. Andrew is an excellent attorney who fights for his clients inside and outside the courtroom.

I endorse this lawyer. Andrew is an outstanding attorney and person. He is smart, effective and efficient. I highly recommend him for any area of law.

Having worked opposite Andrew on several cases over the years, I have seen, first-hand, his passion for the law and for pursuing his client's rights. Andrew is on the top of my list when I am asked for an attentive, local, personal injury attorney.

As an attorney who has known Andrew since he gained admission to the Indiana Bar, I am happy to endorse him. He has an impeccable work ethic and his legal acumen, especially in the realms of tort law and criminal law, is impressive. He represents his clients' interests with passion and confidence and regularly obtains favorable results for them. I trust his judgment. If a client of mine ever has a legal matter/issue that implicates Indiana law, Andrew would be the first person I would call.