John Hollis Baker, Esq. is the only attorney in Athens, Georgia specializing in serious injury case designated as both "AV rated" and "Client Champion Gold" by Martindale.com. John started his practice in Athens upon graduating from Mercer University in 2002 and attending the first ever "Leadership Academy" at the State Bar of Georgia. Since that time he has served as Chairman of the Board of Directors of the Nonprofit Filmathens and President of the Athens Bar.

John specializes in representing Plaintiffs who have suffered serious injuries or death caused by the fault of others. This includes automobile collisions, workplace conditions, trip and fall cases against international retailers, medical malpractice, products liability, or wrongful death cases. In doing so, John has recovered millions for his Clients through a relentless pursuit of justice and earned the respect of both his peers and the Judges of Courts he has appeared in. (links of AV and Judicial plaques) (link of daily report article) John is also experienced in handling a variety of civil litigation matters including commercial contract disputes, probate disputes, and real property disputes.

John is licensed to appear in all Georgia Trial Courts, the Court of Appeals and Supreme Court of Georgia, and Federal Courts located in the Middle or Northern Judicial Circuits. 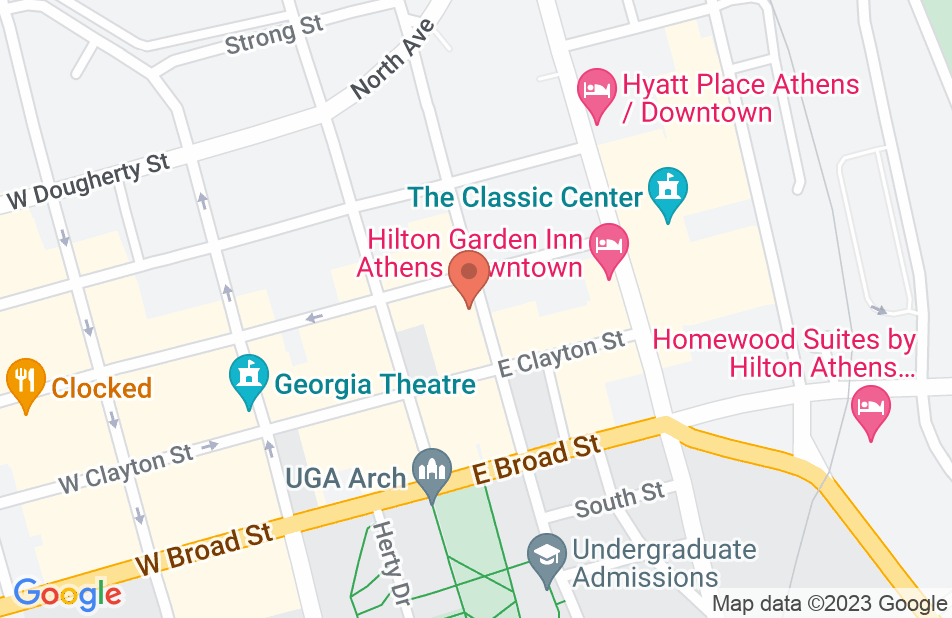 John helped us resolve a very difficult property issue. He was candid about our options, and his integrity was never in doubt. Through his perseverance and professionalism, he achieved for us more than we thought we would get. We trusted him to always have our best interests for the case, and he followed through with everything he said he would do.
This review is from a person who hired this attorney.
Hired attorney

I cannot speak highly enough about Attorney John Baker of Baker and Slider. Mr. Baker represented me for approximately four years. During that time, he kept me fully informed about all the details of my case. He returned my calls promptly and most importantly was exceedingly ethical in all of our dealings. This four-year period was extremely challenging. Mr. Baker was exceptional at managing this case and my expectations. If I needed another attorney in Georgia, (I sincerely hope that I do not) Mr. Baker would be my very first choice.
This review is from a person who hired this attorney.
Hired attorney

Mr. Baker has helped our company over the years in a couple different issues. From day one, he listens to your needs and is there to help you in anyway he can. He was successful both times we have used him. Won, my last case- which was a lawsuit against me and my company. Wouldn't recommend anyone else!!
This review is from a person who hired this attorney.
Hired attorney

I was injured in a slip and fall accident. John Baker advised me in the beginning that my case might be tough to win . I appreciated his honesty, however he did WIN!!! Thank you Baker & Slider, LLC.
This review is from a person who hired this attorney.
Hired attorney

John was awesome! He was attentive, accessible, and extremely prepared. I hope I never need another attorney, but if I do John has a client for life. He addressed all my concerns and was extremely candid with me regarding my particular case. I highly recommend him.
This review is from a person who hired this attorney.
Hired attorney

John Baker did a great job with my personal injury case. I couldn't have asked for a better settlement. I would recommend Mr. Baker to anyone that needed help after an accident.
This review is from a person who hired this attorney.
Hired attorney

I was very pleased with the personal injury settlement John Baker got for me. John was very upfront and honest with me, and his assistant Marianne always answered my questions in a timely manner and kept me updated throughout the settlement process. I have been very pleased with his office and would recommend John Baker and the office of Baker & Slider to anyone looking for an attorney for a personal injury case.
This review is from a person who hired this attorney.
Hired attorney

I was in an car accident that happened right in front of the Law Office of Baker and Slider in May of 2015. John Baker helped me obtain an exceptional settlement to pay for the injuries I sustained. I was treated with compassion and respect throughout the whole process. I would recommend John Baker to any driver or passenger involved in a personal injury claim.
This review is from a person who hired this attorney.
Hired attorney

Mr Baker was professional but very kind while handling my case. He and his staff were prompt with returning emails and phone calls, always keeping me updated as to the status of my case. They worked hard to meticulously collect all the pertinent information so that the job could be done right the first time. The best thing to come out of this legal situation is I now have a relationship with the Baker & Slider legal team.

John was pleasant, honest, and straightforward. He kept us informed on a timely basis as to the status of our case. We are extremely pleased with the outcome; he obtained a very favorable settlement on our behalf . We would highly recommend John to anyone seeking legal advice. If we should need any legal advice in the future, we will certainly be back to obtain the advice of John Baker.
See all reviews

John Baker is an excellant litigator and the go-to attorney for a range of civil litigation matters in and around the Athens area. I highly recommend that you consult his legal expertise, should the need arrive.

John is as tenacious as they come. I endorse this lawyer.

John is a knowledgeable attorney and a true advocate for his clients. He is professional and honest. I highly endorse him as an attorney.

John is my first choice when clients and friends have a legal issue in or around the Athens area. I've sent him litigation matters, criminal matters and personal injury claims and all clients have been represented zealously and professionally. I don't hesitate to recommend John.

John is a diligent and effective attorney who provides a valuable service to his clients. I am happy to have him as a colleague and will continue to refer my litigation matters to him.

I endorse this lawyer. Mr. Baker is a first class lawyer and a man of the highest personal and moral character. I trust John with my most important clients and with my personal legal matters. I can think of no greater endorsement.