Over 35 years experience in helping the injured and disabled.

Mark S. Jacobs is the senior and founding partner in the law firm of Jacobs, Schwalbe, & Petruzzelli, P.C.  Mr. Jacobs has been practicing workers' compensation law since graduating with honors from Rutgers University Law School in 1973. He also has a Master's degree in labor law from Temple University.  Mr. Jacobs is admitted and qualified to practice law before the United States District Court of the District of New Jersey, United States Court of Appeals of the third circuit and before the Supreme Court of the United States of America.

Mr. Jacobs has been ranked as an AV attorney by Martindale-Hubbell for more than 25 years, 1989–2015, which is the highest possible Peer Review Rating for Legal Ability & Ethical Standards and reflects the confidential opinion of the Bar and the Judiciary.

He has been accepted in the National Registry of Who's Who in recognition of his exemplary service both to his community and to his profession. He was a past chair of the Camden County Bar Association's Workers' Compensation Committee he continues to serve as a member of the Committee.

Mr. Jacobs, as a member of the Executive Committee for New Jersey State Workers' Compensation, sat on a panel of speakers at the New Jersey Bar Association annual convention in Atlantic City who discussed "The Future of the Intoxication Defense."

He also serves as legal counsel for the United States Tennis Association Middle States Section (Juniors) for the past 10 years and was chair of the USTA Junior Competition Committee for four years. He is an avid tennis player and has competed in 3 USTA Team National Championships in the 4.0 division during the years 2000, 2005, and 2010. His 2005 Green Valley Tennis Team won the Senior National Championships. In addition he has also coached the South Jersey Macabbi Tennis Team.

Mr. Jacobs is a member of the New Jersey Advisory Council on Safety and Health that has been successful in improving benefits through legislation for workers throughout the State of New Jersey.

South Jersey Magazine has also named him in Super Lawyers for the past 9 years. 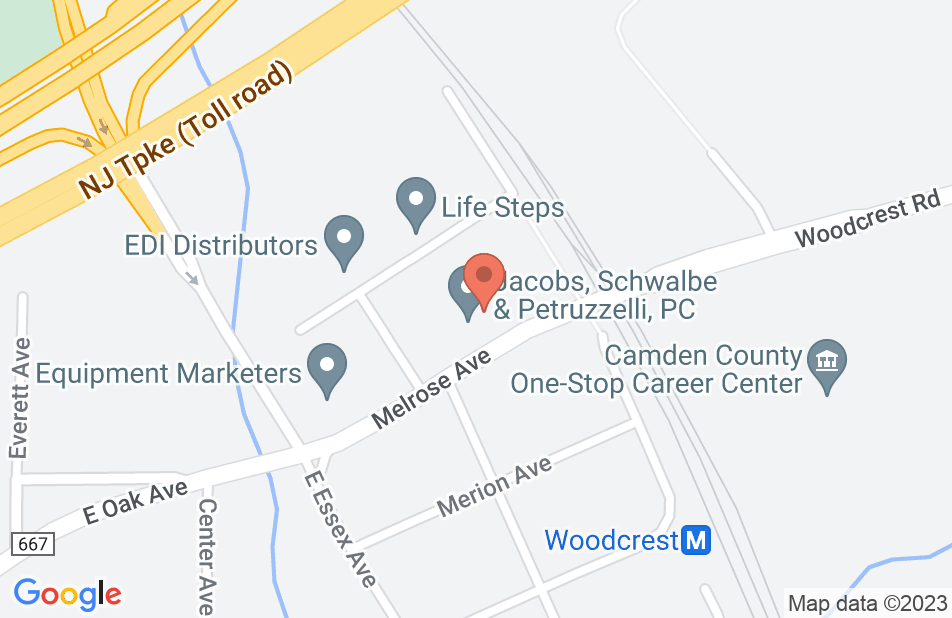 An excellent worker's compensation attorney and a great man!

Mark successfully handled a very complicated worker's compensation case for me. He was kind, honest, patient and extremely knowledgeable. I couldn't have expected a better outcome! Thank you Mark!!
This review is from a person who hired this attorney.
Hired attorney

Mark Jacobs always made me feel like I was his first priority. He was an excellent attorney and got me all my benefits I was entitled to. I would recommend him to anyone who needed help.

My case has been dragging on for years. Though this may be the way it is in workers comp cases, I feel, at times, that Mr. Jacobs could be a little more aggressive getting things accomplished. That said, he has certainly stood up for my rights and has gotten many things approved. He certainly tries to do what is right, but, the law itself holds him back.
This review is from a person who hired this attorney.
Hired attorney

I endorse this lawyer. Mark Jacobs is the lawyer to whom I am pleased to refer my clients with workers' compensation problems.