Helping Accident Victims Get The Money They Deserve!

I specialize in personal injury claims, workers' compensation claims and criminal defense.  I have handled and tried a wide range of state and federal civil and criminal cases in courts all over Massachusetts, from Boston to Worcester.  I have also tried numerous Federal Civil Rights lawsuits in the United States District Court for the District of Massachusetts.

I grew up in Southern Worcester County. Following high school I attended Clemson University. After graduating from Clemson I attended and obtained my juris doctorate from New England School of Law in Boston.   I was admitted to the Massachusetts Bar in 2005 and am licensed to practice in all courts within the Commonwealth of Massachusetts. I am also a member of the Federal Bar licensed to practice in the United States District Court for the District of Massachusetts. 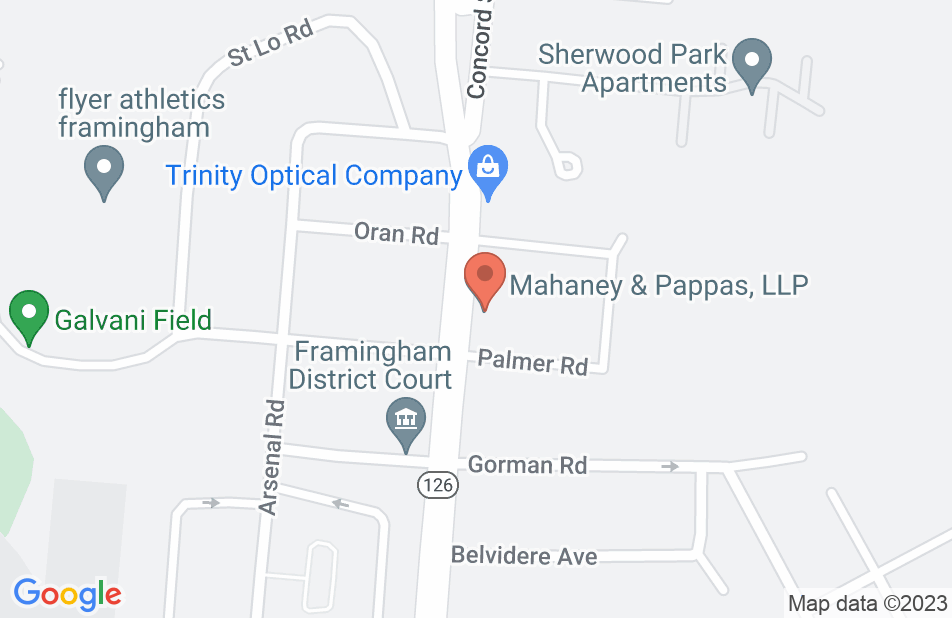 I was rear-ended in Boston and injured my back. After my accident I hired Attorney Chuck Pappas to help me with my accident case. He and his staff were great. They kept me updated on my case from start to finish. I was very happy with the settlement he got for me and I couldn’t thank him enough. I would highly recommend Chuck Pappas to anyone hurt in a car accident.
This review is from a person who hired this attorney.
Hired attorney

Mahaney & Pappas represented me in a Civil Lawsuit. Thanks to their Negotiating and knowledge of the legal system I was awarded a very favorable settlement.
This review is from a person who hired this attorney.
Hired attorney

Attorney Charles Pappas provided excellent and quality service. My needs were met and the firm was invested in my case and me as a person. They were easily accessible, return phone calls and emails promptly. Aggressive, when it was require and got the job done. Attorney Charles Pappas, and his staff all produced the quality of an attorney and firm that anyone would want to hire when dealing with a Car Accident case.
This review is from a person who hired this attorney.
Hired attorney

Charles was a wonderful, he explained every thing to me so that I understood what was going to happen, I would recommend him highly
This review is from a person who hired this attorney.
Hired attorney

The two best words you will ever here is "Not Guilty"

I had a difficult DUI case. Let's just say I didn't just have one glass of wine like the police report stated...... However, Attorney Pappas told me it's not about what you did wrong it's about what you did right. Which he so fantastically proved! While he examined and cross examined the two police officer witnesses I had to keep my poker face on however inside I was grinning from ear to ear. I'd recommend Attorney Pappas to anyone looking for a professional, hard working, winning attorney!
This review is from a person who hired this attorney.
Hired attorney

Chuck Pappas delivered an exceptional and consistent client experience every time we discussed my case. He is intelligent, thoughtful, responsive and thorough. He made this whole process very simple and easy on my family and myself. I would highly recommend him as an attorney.
This review is from a person who hired this attorney.
Hired attorney

My husband had recommended Mahaney & Pappas law firm to me because my case was extremely complicated and he knew they were one of the best lawyers in Massachusetts. I decided to reach out to them to see if they could help. Not only did they go above and beyond for me, they were very kind, patient and understanding of my entire situation. The way they handled my case put me at ease, every step along the way. They reassured me of every little possible detail so I never felt nervous, instead I felt confident with them by my side. I would highly recommend attorney Chuck Pappas to everybody I know. They're both excellent attorneys, very knowledgeable and I'd highly recommend them to all my friends and family. Top notch and WORLD CLASS lawyers. Best in the business!
This review is from a person who hired this attorney.
Hired attorney

I was referred to Chuck Pappas by a friend after I was rear ended and hurt my back and neck. He was great at explaining how the accident case would proceed. Things turned out pretty much just how he said they would. His office staff were very nice. It wasn’t a big case, but Chuck took care of me and I would recommend him
This review is from a person who hired this attorney.
Hired attorney

i am so happy that I chose Chuck Pappas to handle my personal injury claim. He walked me through the process and got me a settlement that far exceeded what I had anticipated. I would highly recommend him.

I contacted Attorney Pappas for assistance regarding injuries sustained while at work. Attorney Pappas took the time to speak with me at length about the process of filing the appropriate insurance paperwork, and how to proceed with a workers compensation claim. Attorney Pappas is very competent and professional, and gets great results for his clients. I would definitely recommend Attorney Pappas to anyone in need of legal services.
See all reviews

Chuck is a highly skilled attorney who is equally as good inside of the courtroom as he is outside. I endorse this lawyer.

Charles is an exceptional attorney. I have worked side by side with him on complex criminal matters, and he gets results. Consider yourself completely protected if you hire Charles Pappas as your attorney.

Attorney Pappas is an excellent lawyer. He zealously represents his clients, and is well respected in the legal community.

I endorse this lawyer. Chuck is aggressive and smart. He is an excellent lawyer.

I've worked with Chuck for years. He's and excellent litigator with incredible attention to detail. He is on top of all current case law. He is a formidable opponent in the courtroom. His clients love him.

I have known Charles Pappas to be a hard working and well prepared zealous advocate for his client's. He is an excellent attorney.

I've had the pleasure of knowing Attorney Pappas for over 10 years and have referred numerous clients to him and his firm. Attorney Pappas is a skilled litigator and it's my pleasure to endorse him.

Charles Pappas is an excellent attorney who advocates strongly on behalf of all is clients and is always well prepared and well versed in the field.